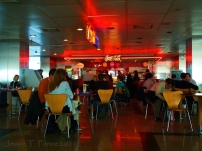 I’m not very fond of using the flash even in indoor photography because I feel that it somehow distorts the resulting photo and I end up editing them in any case.  So I just experiment with various settings in my DSLR, choose the photos that best capture the subject and then discard the rest.  I am also a light traveler so hate carrying a tripod around.  This magnifies the difficulty of taking photos in low light conditions but I love the challenge.  I think the most challenging low-light photography I ever did was the one inside a cave in Kutaisi, Georgia (see Exotic Travel Destinations – Georgia:  The Sataplia Cave and Nature Reserve in Kutaisi).  Colored lighting effects were installed inside the cave, using a flash was being discouraged, there were no platforms or objects that could help support my camera, and I didn’t bring a tripod as usual.  So I had to hold my breath and keep my hands very steady as I took photos and most came out just fine, some a bit grainy but my Georgian hosts liked them anyway.

This is the first of my series of low-light indoor photos in a category which I entitled “Exciting Indoors”.  Interior scenes of restaurants in three different places are featured in this post.

“Rustic” / Georgia 2011 [Mtskheta, the old capital]: This restaurant is located at the old Georgian capital of Mtskheta in the outskirts of Tbilisi and is very popular for its excellent khinkhali and other traditional Georgian dishes (see The Khinkali and Other Traditional Georgian Dishes).  According to my hosts, the restaurant has been in operation for many decades now and the rustic ambiance of its interior perfectly matches its history and tradition.  I particularly liked the texture of the wooden tables and stools so I snapped this photo as my Georgian hosts were making their order at the counter.

“Oriental” / Singapore 2011 [Suntec Centre] : One advantage of travelling and dining out alone is that you can focus more attentively to your surroundings and more effectively catch opportunities for a good photo.  While on transit in Singapore, I spent some time window shopping at the Suntec Centre then spontaneously entered this quiet Japanese restaurant when it was time for lunch.  My object was to eat, not to take photos but couldn’t resist the urge to take a photo of the empty tables and a few quiet customers dimly lit by modern Japanese lanterns that seem to float like bubbles in the air.

“Neon” / Turkey 2011 [Ataturk International Airport, Istanbul] :  I had a long stopover at Istanbul while on my way to Tbilisi so I bought a can of soda at this airport restaurant and took a table at the far end.  I was observing the mood of the various customers (most of them looked tired and impatient) hoping to catch an interesting portrait of a traveler but decided to capture a photo of the whole section instead.  The stark red neon light above the counter provided a dramatic effect to the photo as it bounced off the ceiling and the floor but I wondered what effect it had on the psyche of these bored tourists.