I had an opportunity to help undertake relief and rehabilitation work in Aceh in 2006, more than one year after the Indian Ocean Tsunami devastated the place. As usual, I always had a camera with me while at work and I was able to collect a few photos.  The devastation was still very evident when I was in the region but I didn’t want to delve on this subject matter in my photos.  In lieu of photographing the suffering, I instead tried to capture how the city and its people were gradually recovering from the tragedy.

Unfortunately, I was not yet blogging then. And when I did start writing short articles and uploading my photos into the net; it was not with WordPress so my photos as of now are scattered in at least 4 different sites in the net.  This was why, when I started blogging at WordPress, one of my intentions was to see whether I can eventually consolidate them within this site.  So today I’ll begin moving my photos at mylifegains.multiply.com which I have already abandoned to “A Traveller’s Tale” at WordPress.

It’s been almost 7 years now since the Indian Ocean Tsunami happened on 26 December 2004. Many other calamities have happened since then including the more recent and widely publicized tsunami devastation in Japan but still it will be nice to have a second look at Aceh way back  in 2006. Here’s a short photo essay.

"Ark": This boat was carried by the waves over a residential area then was left sitting on a house several hundred meters inland. Newly constructed houses can be noticed at the foreground.

"Fishing Boats": Donors worked overtime to support survivors in recovering their livelihoods. These fishing boats distributed by various humanitarian agencies sat on debris of what used to be a residential area by the seaside.

"Waiting for the Tide": This lone fishing boat sat on what used to be a mangrove area that got flattened by the tsunami. Newly built housing units can be seen at the background. 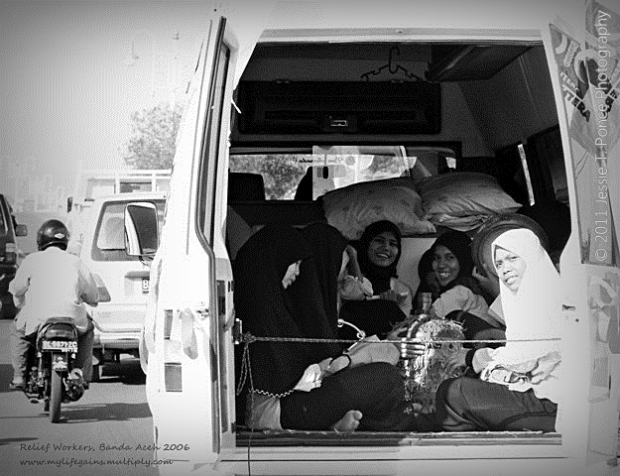 "Relief Workers": Humanitarian aid workers can be found everywhere in Banda Aceh City and the whole province of Nanggroe Aceh Darussalam. I captured this photo of young Muslim ladies on their way to their field work as I followed their van along a city street. 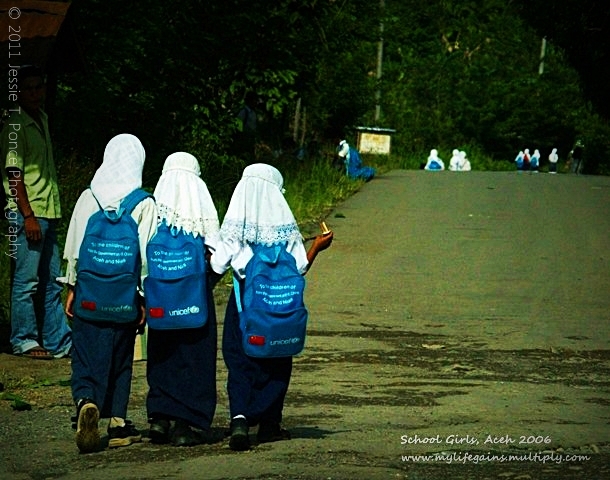 "School Girls": Through intensified support from the UN and other international donors, the schools have started operating again. In this photo, school girls carrying their stuff in UNICEF backpacks walk early to school. 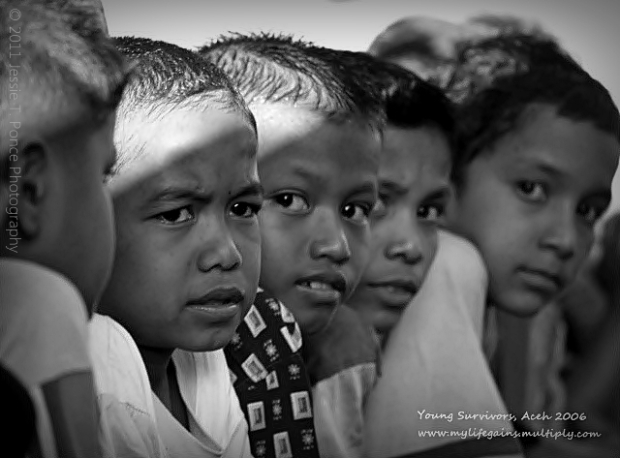 "Young Survivors": The one thing I admired most among Aceh people was their resiliency. Not much bitterness can be observed among those I encountered but rather a strong sense of hope and determination was often evident. One of my most favorite photos was of these young Acehnese boys with very strong facial expressions.

"Almost Home": Aceh Province is predominantly agricultural. The locals have started replanting their farms and the ricefields in the plains have started to show signs of renewed life.

"Aceh Highlands": The mountainous portions of Aceh Province were not directly affected by the tsunami but rather benefited from the peace agreement between Jakarta and the GAM secessionist movement that got brokered to bring in much needed humanitarian assistance. Peace became a silver lining to the dark cloud of tragedy that enveloped the province.

"Regrowth": For 3 decades, the Aceh highlands has been a battleground between government forces and GAM rebels. In the aftermath of the tsunami and the peace agreement, signs of livelihoods getting re-invigorated can be seen on these once bloodied grounds. 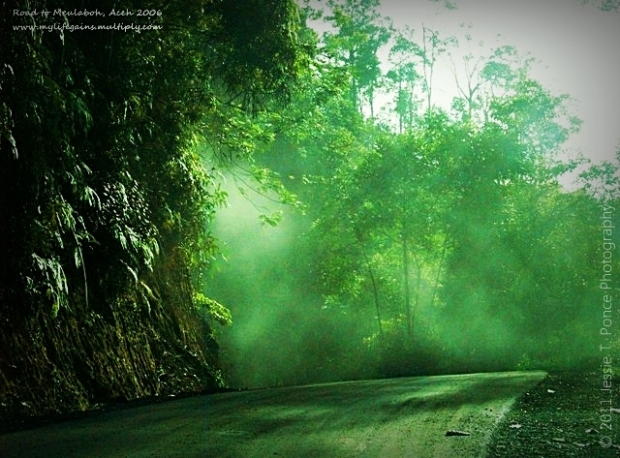 "Road to Meulaboh": Like the elusive Sumatran tiger that roams the jungles of Aceh, lasting peace and development maybe difficult to catch but can also be just somewhere round the bend.