A seemingly unearthly sight of a living human head ethereally suspended, almost separated, from the body by a pile of brass rings — a sight that I once naively thought could only belong to a circus or the museum.  This was what deeply fascinated me as a young boy tinkering with my dad’s vintage Kodak camera and browsing through photos of long-necked women in an old National Geographic magazine.  The memory of those shocking images somehow got stuck in the obscure corners of my head and instantly got revived when my local guide told me that some of these women were operating near where we were. 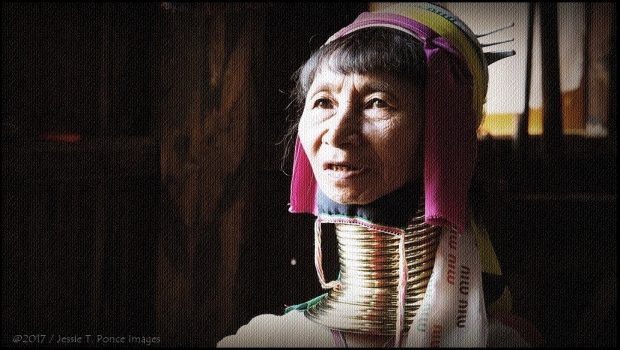 I already had a great day cruising on a traditional boat and photographing scenes at Inle Lake in the Shan State of Myanmar. I was about to think that I have already seen what I needed to see of the area when my local guide told me of a souvenir place somewhere in the lake that features Kayan women.  I did not expect that.  I always thought that Kayan people lived in the mountainous region of Kayah State, some 160 kilometers from where we were but then again, Inle Lake is a top tourist destination (second only to Bagan).  Understandably, a tourist shop featuring some of these interesting women could provide an edge over competitors. Without hesitation, I instructed our boatman to bring us to the place.

After a few splashy twists and turns in the lake’s maze of complex channels and waterways, we arrived at a wooden two story building with a simple sign that said ‘souvenirs’ and showed some photos of the Kayan women.  We went into the building and, after passing through a number of shelves and display racks of Myanmar and Inle Lake artifacts and souvenir items; we finally found the back corner where two Kayan women were working in their weaving looms while another one provided assistance from behind.  The shop owner explained that she provided all the materials that the women use and shared with them a portion of the sales as commission.  The ladies get to keep all the tip from tourists and photographers.  I prepared my camera and took a deep breath. I was finally facing live versions of the Nat Geo photos that captured my imagination a long time ago! 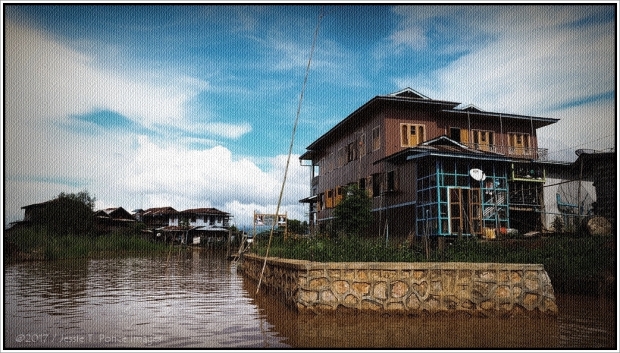 According to literature, the Kayan people belong to an ethnic minority group in Myanmar, referred to as Red Karen or Karenni people.  There are at least six sub-groups belonging to the Red Karen. The subgroup referred to as Padaung or Yan Pa Doung is the Kayan Lahwi sub-group whose women practice the use of neck rings or brass neck coils.  The small Kayah state, in eastern Myanmar,  which shares a border with Thailand’s Mae Hong Son Province, is where the Kayan people traditionally live.

In the late 80s and early 90s, conflict between the military regime and armed ethnic groups drove Kayan tribes across the border to Thailand. Among the refugee camps set up in Mae Hong Son Province was a “Long Neck Section” which was dedicated to the Kayan people.  Because of their uniqueness, the section quickly attracted tourists and easily became self-sufficient from tourists revenues, although this created some controversies, mostly related to issues of exploitation of the unique culture.  Interventions by the UN, albeit minimally, helped protect the Kayan people’s rights. 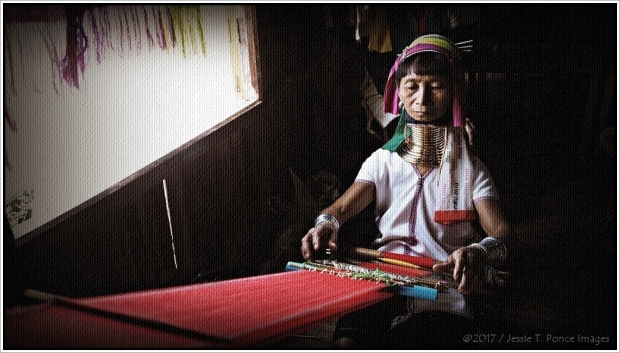 Kayan girls start wearing neck rings when they are around 5 years old.  The coils are replaced by longer ones and the number is increased as they grow older. The weight of the brass pushes the collar bone down and compresses the rib cage thus creating the appearance of a stretched neck. Scientists say that the neck itself is not lengthened but it is rather the deformation of the clavicle that creates the appearance.

There are many myths and versions explaining this unique practice, many of them simply hypothesized by visiting anthropologists.  Some say that the rings protected women from becoming slaves by making them less attractive to other tribes, others say that the coils originate from the desire to look more attractive,  still others suggested that the coils give resemblance to a dragon which is an important figure in Kayan folklore, while others suggest that the coils have a practical purpose of protecting the women from tiger bites.  When asked, Kayan women may acknowledge these ideas but would probably say that they only want to maintain their cultural identity.

There is pressure among Kayan women to continue wearing neck rings.  To the Kayan tribes in Thailand, the pressure comes from the potential for revenues from tourists willing to pay entrance fees to visit the Long Neck Section and thus sustain their needs at the refugee camp.  In Myanmar, the Karenni National People’s Liberation Front (KNPLF), an armed cease-fire group, have made attempts to invite the Kayan to return to Kayah State to set up their own tourist villages.

However, just like many unique cultural practices in the world, there is equal pressure to abandon the practice of wearing neck rings.  The government of Myanmar, in an effort to appear more modern to the developed world, began discouraging neck rings and many Kayan women began breaking the tradition.  Some of the younger women started to remove their rings, either to give themselves better opportunities to continue their education or in protest against the exploitation of their culture. One  older woman removed her neck rings after wearing them for over 40 years and reported initial discomfort.  The discomfort faded after a few days but the long-necked appearance remained and the coils left a persistent skin discoloration on her neck, as if symbolizing the deep Kayan identity that prevailed in her after the coils. 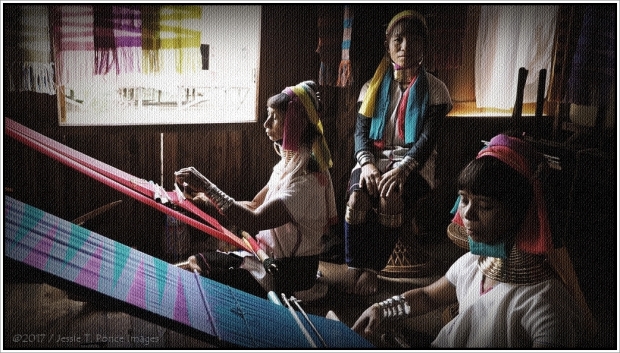 I bought a couple of their colorful handwoven shawls and, as I handed the three intrepid Kayan women a generous tip and profusely thanked and wished them well, I made a mental note to visit the traditional home of the Kayan people up in the mountains of Kayah State.  Soon — before their long and unusual tradition became memories confined only to museums and history books.

7 thoughts on “The Long-necked Kayan Women – A Surprise Encounter”